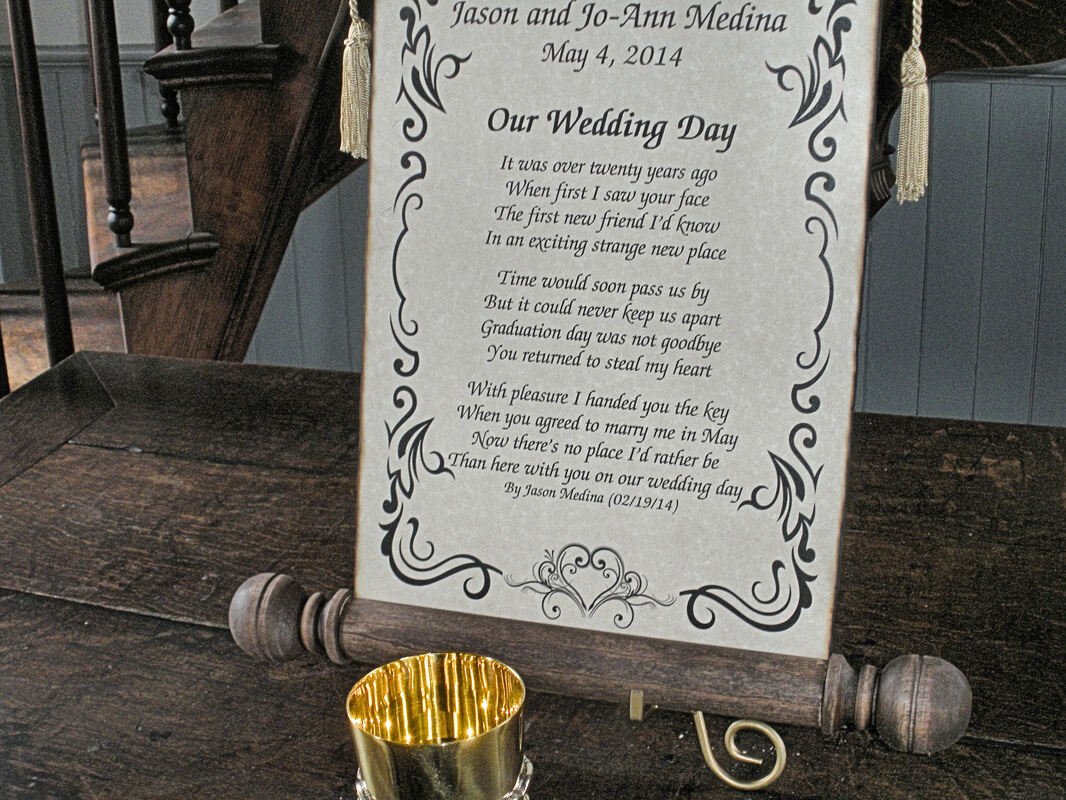 Written for my wedding ceremony to display at the Old Dutch Church in Sleepy Hollow.

I have written dozens of poems, since I was a teenager. I am not sure of the exact count, but it is definitely over 150. The poems have been about many subjects, such as romance, life, death, people, places, and myself. I find that I write the best ones whenever I am in a state of depression. It's no wonder poets are usually thought of as dark brooding people.

In June of 2006, I had a poem published prior to my writing any books. The poem was called Awaiting Death. It was not a big deal, since it was not available to the public, but it was still nice to get a book in the mail and see my poem in it. I felt proud. The book was called Timeless Voices and it included a bunch of poems by others. It was a custom book made for anyone who submitted a poem. ​
In recent years, I included poetry within the stories and books I've written. There are some in The Diary of Audrey Malone Frayer, another one in A Night at the Shanley Hotel, and 13 in my KPPC: A Journey Through History books, just to name a few. This time I am gathering them all together and putting them into one collection. I hope you will enjoy them. I will also include photos with some of the poems. Be warned... some of these poems are quite silly, since many were written when I was younger. I plan to write some new material, as well.

Of course, I am not sure when this project will be completed, yet. I plan to write a few new poems just for the book. In the meantime, please, be patient and enjoy the ones on this page.

Below are a few of my poems dedicated to the Kings Park Psychiatric Center, the subject of more than one of my books. These were included in my 3-volume reference set, KPPC: A Journey Through History. 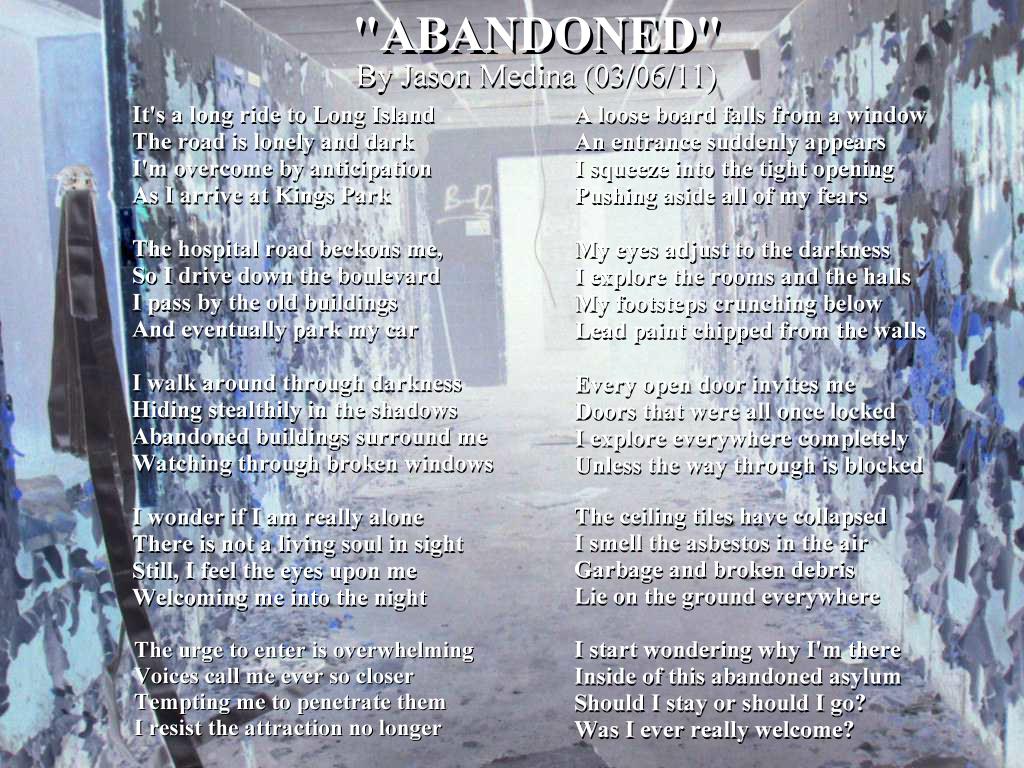 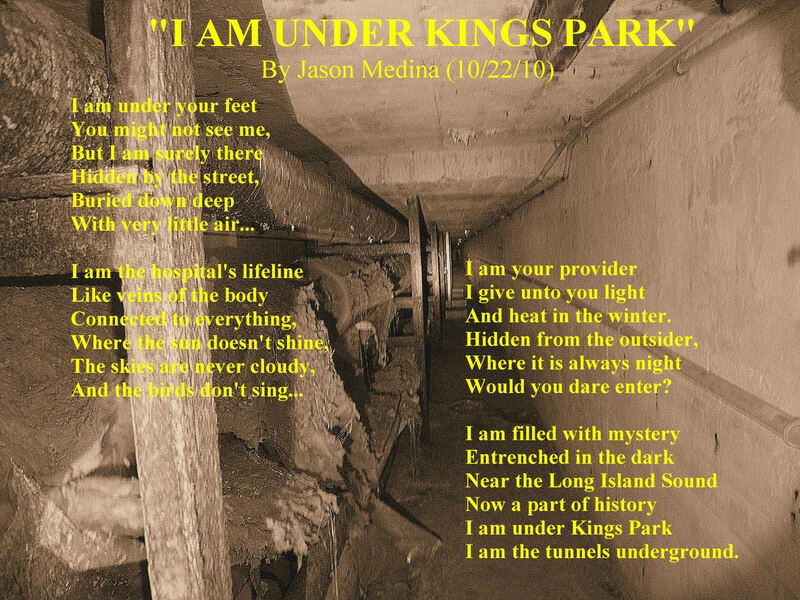 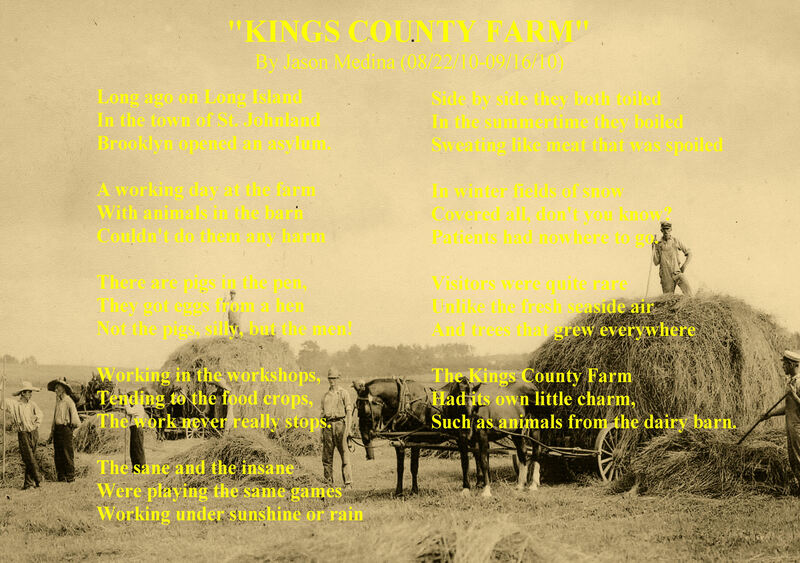 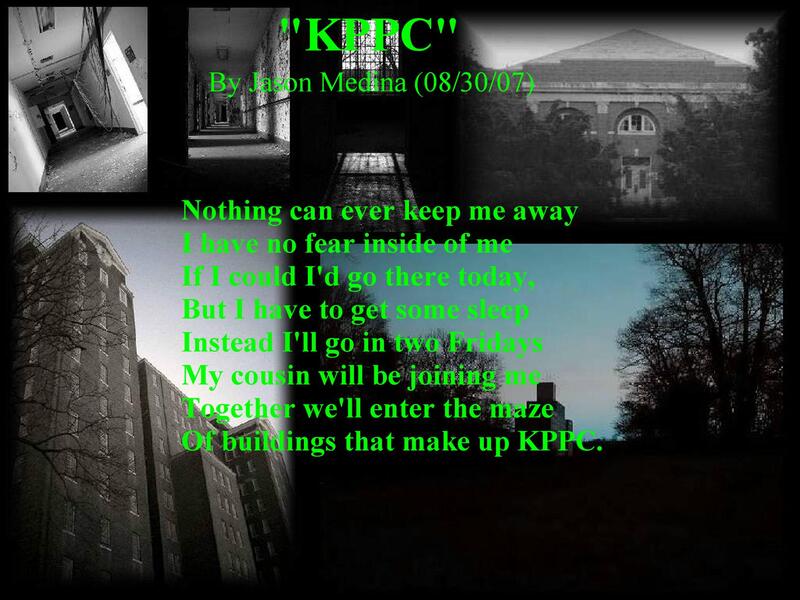 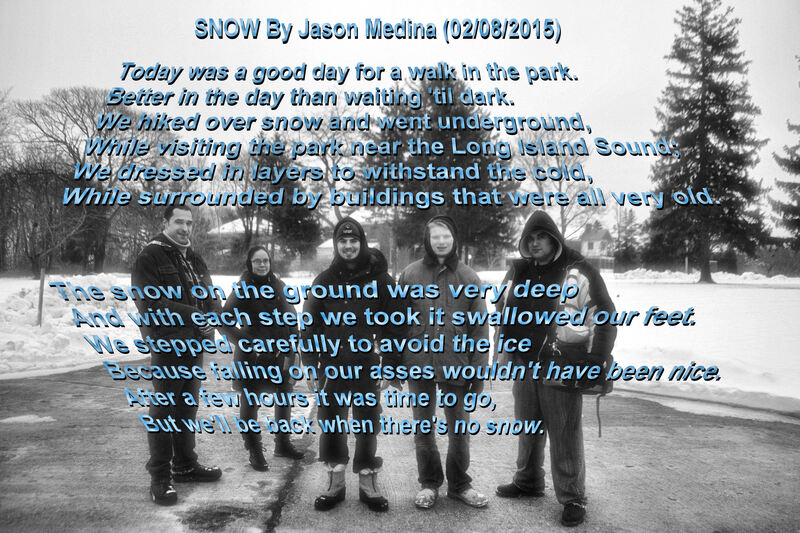 These are a few of my older poems submitted for your approval, as Rod Serling used to say. 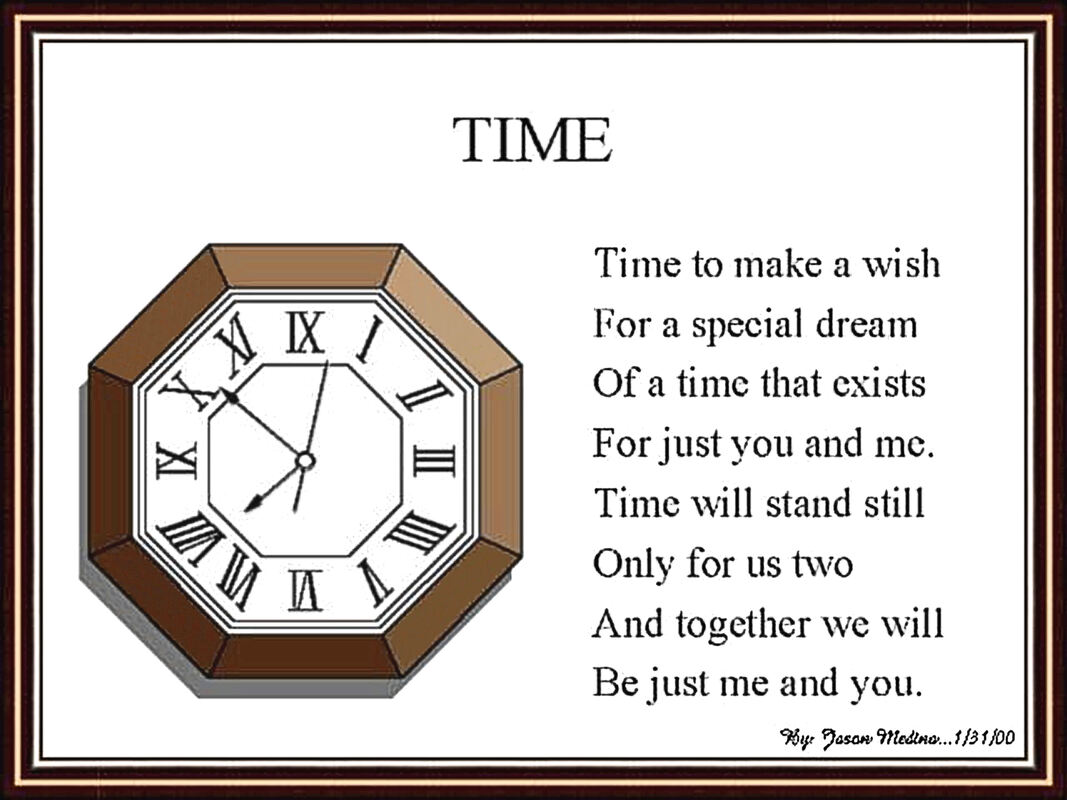 And a few zombie inspired poems... 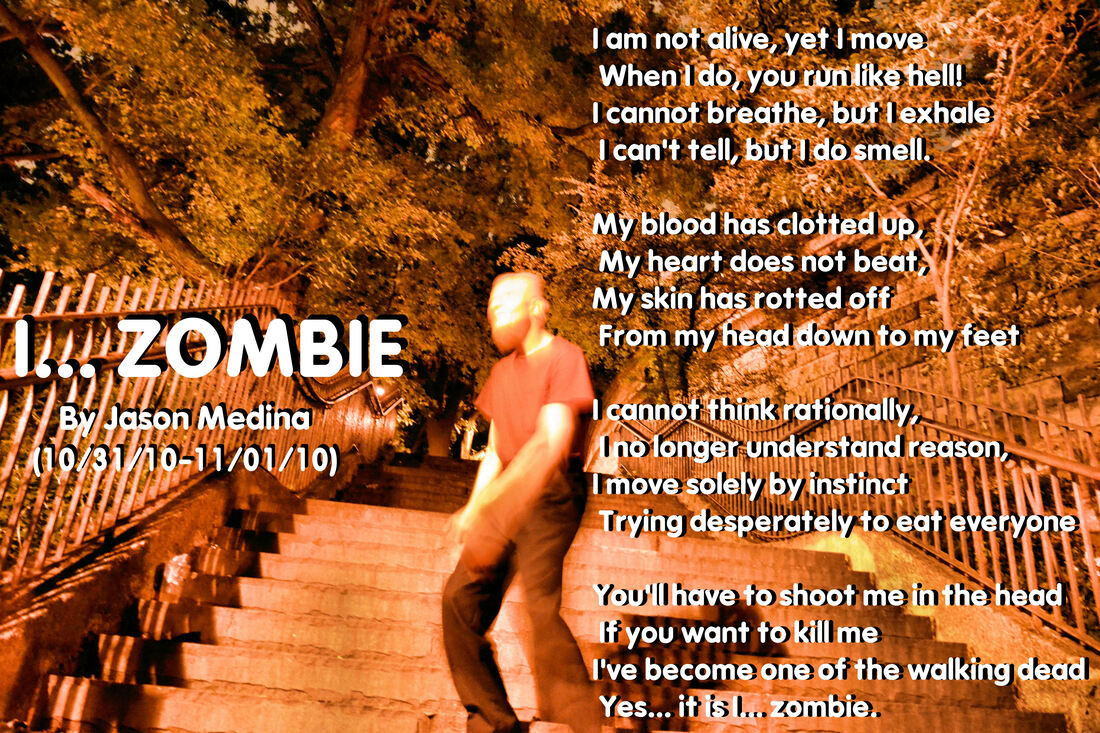 Both photos were taken on July 25, 2017 in Manhattan for my book, The Manhattanville Incident, but the poems are older. 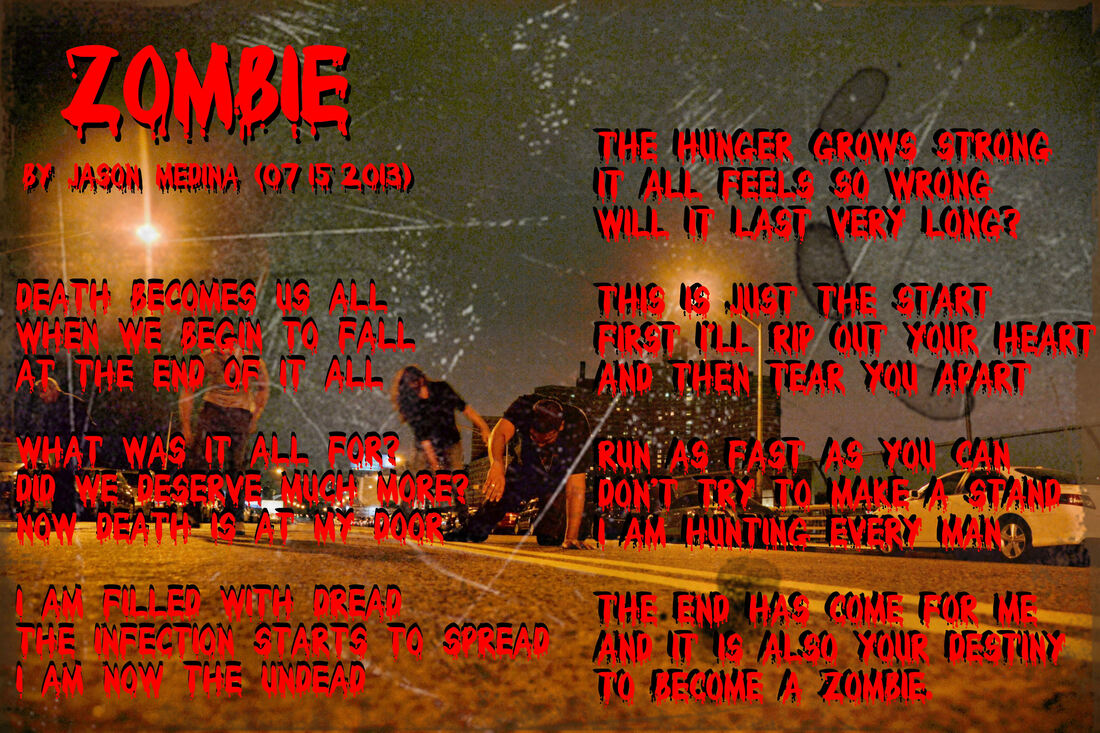