"The mind is like an empty canvas and we are all artists, who spend our entire lives creating our own unique masterpieces." - Jason Medina

When it came to these stories about the future, I chose to think very far ahead of our time, going way beyond our lifetime. I always found it funny how so many black and white movies, television shows, and classic books of the past didn't do the same. They usually set their futuristic stories in the 1980's-1990's, decades which have come and gone.
​
​I can name quite a few episodes of "The Twilight Zone" episodes that take place in the future when Earth was highly advanced, only the timeline when these stories all took place is now in our past. Don't get me wrong. I am not trying to put down Rod Serling. I love the guy. To this day "The Twilight Zone" is still one of my all-time favorite television shows. I often watch my own marathons on DVD or Netflix. It had some excellent stories written by some of the best writers of the time, such as Rod Serling and Richard Matheson, and a fantastic cast of actors like Burgess Meredith, Robert Duvall, William Shatner, Ed Wynn, Martin Landau, and the lovely Anne Francis. Needless to say the series has been an inspiration to me on so many levels.

As a child, another form of entertainment helped boost my storytelling skills. Believe it or not, my many hours spent playing with "Star Wars" and "G.I. Joe" action figures was a tremendous help. It allowed me to use my imagination and push my limits to make new plots for my games. I mostly played with my cousin, Moses, and my nephew, Chris. Whenever we put our heads together and combined our imaginations to play with the figures, we didn't just play random games with no plots like most children, nor did we play cheap movie adaptations. We made action-packed ongoing story driven sagas that could be continued another time. Each game was a new story to be told and a new adventure to experience. There was one time when my friend came over and decided he'd rather watch us play, than to join in on the game. He told me it was as if he was going to see a movie. We had games that took place in space, on other worlds, in fantastic realms filled with sorcery, or in regular Earthly urban environments. There were games about war, rock bands, street gangs, the mafia, westerns, inter-dimensional time travel, space travel, super heroes, monsters, and even romance.

Every game helped feed the fire of my imagination leaving lasting impressions and inspirational ideas. The mind is like an empty canvas and we are all artists, who spend our entire lives creating our own unique masterpieces. My mind is my own and it is a work forever in progress.

There are so many amazing and creative people, who have inspired me. I cannot possibly name them all. I will give a small list of some of my greater influences to help you understand, where I get my ideas from. It is thanks to the following people that I have defined who I am today.

Of course, I must also include my greatest influences by far, my parents, for whom I never would have become the person I am today. Thank you, Waldemar and Mildred. I hope I have given you something to be proud of.

I have to include another important influence in my life... film. I personally have over 3,400 movies on DVD and/or Blu-Ray. I really love watching movies. Everyone, who knows me is aware of that fact. I've even made my own home-made horror movies using family members and friends as actors. There is no limit to the amount of influence a writer can gain from watching movies. I have no preference either, which keeps my mind open to various genres. I like comedies, thrillers, dramas, action and adventure, animated features, horror, science-fiction, biographies, documentaries, etc. The list goes on.

Most films originate as books, so it is hard to be influenced by one and not the other. I must say I also have a fairly decent book collection. I have no idea how many and it would be very difficult to try and count them all without redecorating my office in the process. I've always dreamed of having an extensive library of books to call my own. I certainly do. If only I had more space for them because they are piled up so deep on my shelves, it makes it kind of hard to read them. I can barely find some of them and they are organized to a certain extent.

Unfortunately, my time is spread between all of my different hobbies, which doesn't help. I am ashamed to say, as a writer, there are countless great books that I own, but have still not read. I keep telling myself, "someday..." I know a lot of you can relate to me on that one. When I retired from the NYPD in 2014, I was able to increase the amount of books I read a year. I have also given myself more incentive through my reading challenges on the Goodreads website. I am happy to say I now read about 15 or more books a year, which is a huge improvement over one book every year, if that!

I remember it was in high school when I began to take my writing seriously. I learned how to greatly improve my grammar and literary sense, partly due to my English teacher at the time, Mr. Frank Brown. He remains a good friend to this day. My knowledge of literature increased thanks to him and his love of Shakespeare. I also took it upon myself to dabble into poetry, after I had to write one for school and received a good grade.
However, despite my great love for music, I cannot dance and do not care to learn.

​I have several other hobbies. I enjoy drawing, painting, playing video games, photography, collecting/reading comic books, urban exploring, investigating the paranormal, traveling, and researching old history. I also volunteer at a historic site in Yonkers, Sherwood House Museum, which is the second oldest building in the city.

Over the years, I have become quite the paranormal investigator. Unexplained phenomena, such as U.F.O.s, Bigfoot, and ghosts have always fascinated me. As a result, I developed my great love of photography, history, and doing extensive amounts of research on supposedly haunted locations. I have my very own team of paranormal investigators called the Yonkers Ghost Investigators. You can see our work and all of our evidence on our website.

At the Kings Park Heritage Museum researching the abandoned Kings Park Psychiatric Center on Long Island.
So, now that you know about most of my hobbies and how they came to be, I will give you just a few more tidbits about myself. I am a Taurus and, therefore, can be very stubborn, but I can also be reasonable. I try to keep an open mind. I am always kind to those, who deserve kindness. I am considerate of other people's feelings, as well. I have respect for everyone, until they show me they do not deserve it. Respect goes a long way and it goes both ways. Moving along, I am quite the romantic and a little flirtatious, which is ironic considering I used to be very shy. Somehow, it has become easier to talk to people and sometimes I don't shut up. Although, I am still usually quiet, for the most part, but I enjoy joking around with friends and family. I believe it is wise to have a good sense of humor, especially in this world. I hate politics and I am not religious, so I tend to avoid discussing both topics. As I mentioned earlier, I also like traveling, especially taking road trips because I enjoy driving... fast. New York is where I was born and raised. It is where I worked and live. It is where I will be interred when the time is right. I am a native New Yorker to the end.

That's all I will tell you about myself for now. The rest is top secret. If I tell you, then I will have to kill you. Actually, I am just joking, then again, maybe I am not. Why take unnecessary chances?

I basically made this website because I want to give everyone a place to learn about my books and myself, while also giving a preview of the stories I will write throughout my career as an author. Most normal authors write one book at a time and often end up with writer's block. Sometimes, a few years might pass by before another book is written. That will not be the case with me. I am no normal author.

As of the first day this website was created, I already have over 70 stories or books planned. Some are already partially written. I've already selected titles and written plot summaries for everything I will be working on, some of which are on this website. Others are on my computer waiting to be developed and shared with the world. I only wish I could share these stories in a timely fashion, but the reality is that these books will take me the rest of your life for me to write. (Note how I said your life, as I will live forever. HA, HA, HA!)

When I tell a story, I like to be very descriptive, so I prefer to use actual locations and objects that exist in the real world. Here on my website, I can help the reader to visualize what's being described in the story more clearly. The photos used for this purpose are not always mine. You will notice most of the book pages have unique photo galleries, which also include alternate cover images and images used in the book.

As a disclaimer, I'd like to say most of my stories are mature and mainly written for adults. While they are not pornographic, some of them do have sexual content and in some cases, extreme violence. I make NO apologies for my creativity. You either like it or you don't. Either way, I would greatly appreciate it if you review each book, as you read them, through any media source you prefer.  It really helps me out. Thanks!

"I make NO apologies for my creativity." - Jason Medina 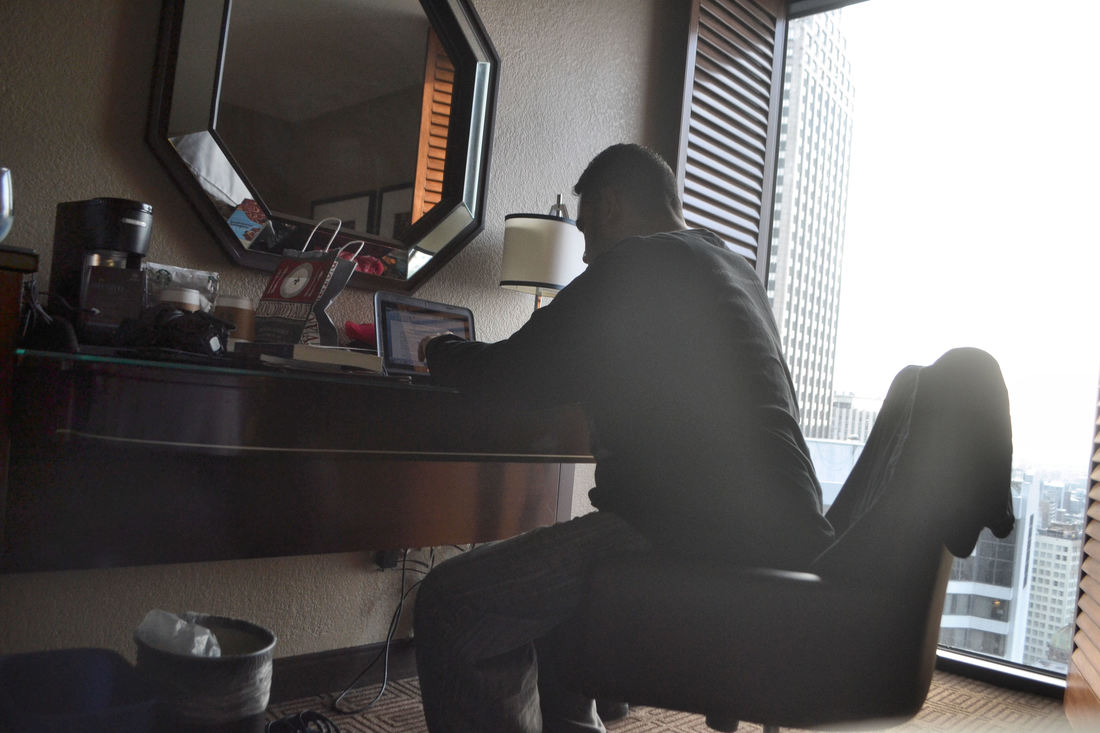 Writing "A Ghost in New Orleans" at the Sheraton New Orleans on February 24, 2015.
Weebly sign in